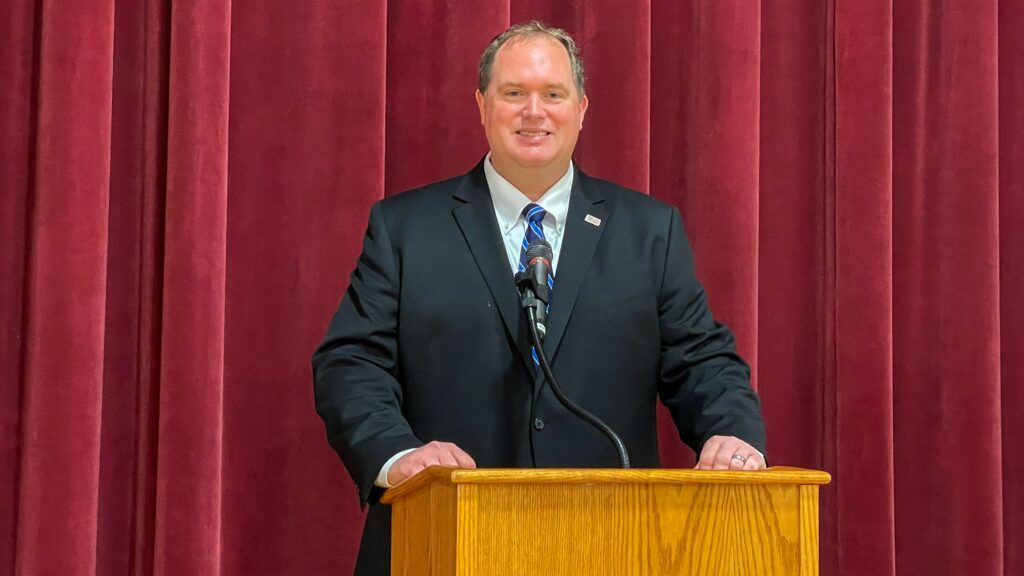 Christian Brothers Academy is pleased to announce that Cornelius “Neil” Begley ’96 has been chosen as the 10th principal in school history.

A science and mathematics teacher at CBA from 2003-2009, Begley returns to the Academy after spending 13 years at St. Leo the Great School in Lincroft as vice principal and principal.

“It is an honor to come back to a place which helped form me into the man I am today,” Begley said. “Having spent many years at CBA, both as a student and an educator, I am excited about my new role as Principal. I look forward to working with the students, faculty, staff, and parents as we continue the rich traditions of CBA.”

“I want to personally congratulate Mr. Begley and welcome him home,” said Ross Fales, CBA’s president-elect and current principal. “I am looking forward to working with him on CBA’s mission to holistically develop young men of character in the Lasallian tradition. Mr. Begley is an innovative professional educator who is deeply committed to Catholic education.”

Begley will be succeeding Fales as CBA principal, as Fales elevates to school president on July 1. CBA has followed the President-Principal leadership model for over 30 years, with Begley taking the “chief operating officer” role. He will be responsible for leading the all-boys, college preparatory school’s day-to-day academic operations and essential student functions. He will be the third lay principal in Academy history, following Peter Santanello (2012-15) and Fales (2015-22).

Begley’s appointment as CBA’s 10th principal is the result of a search process that spanned two months and included a search committee of six different stakeholders from various areas of CBA. The search committee, in addition to the president-elect, narrowed down the list of qualified candidates, conducted interviews with the finalists, and extensively deliberated to reach this exciting conclusion for the future of CBA.

“I am elated that Mr. Begley will be joining the administrative team as our new principal,” said Brother Tom Gerrow, CBA’s interim president. “I am confident that he and our new president Mr. Fales will continue CBA’s tradition of success well into the future.”

Begley has been a champion of educating the whole person since his time as an undergraduate at the U.S. Military Academy at West Point, where he earned a bachelor’s degree in economics. He went on to serve as a Field Artillery Officer in the Army, stationed at locations such as Fort Bragg in North Carolina and Schofield Barracks in Hawaii.

After his military career ended, Begley found himself back in Lincroft at the Academy, teaching standard and honors physics, algebra II, and honors geometry. He was integral in promoting student life at CBA as well, serving as Student Council moderator for several years.

Teaching at CBA was a natural fit for Begley, as he had embraced the Academy experience as a student. He was a varsity basketball player, an inductee into the National Honor Society, vice president of Student Council, a member of the Math Team, and a senior GURU mentor – all activities that current CBA students are still involved in.

“Being a student at CBA fostered a foundation of faith, honor, and character on which I have strived to live my life,” Begley said. “My military experience cultivated immeasurable skills to be an effective leader and how to lead by example. After serving in the military, I realized my passion was teaching and guiding young people to be the best they can be. Returning to CBA as a teacher taught me how to engage and educate students in a faith-filled environment.”

During his time as a CBA teacher, he took part in the Brothers of the Christian Schools’ Lasallian Leadership Institute. Begley obtained his master’s degree in Educational Leadership and is currently finishing his doctoral degree in K-12 Educational Administration, both at Seton Hall University.

“As a graduate of CBA and someone who has attended Lasallian formation, I know that Mr. Begley understands the unique opportunity that CBA represents to young men in this area,” Fales continued. “Having served as a leader for 13 years in another school, Mr. Begley will also be able to bring fresh eyes and a new perspective to the Academy.”

Begley lives in Monmouth County with his wife Jayme and their two children.