As freshmen at a college preparatory school like Christian Brothers Academy, there is understandable nervousness as these young men arrive on campus for their first fall as CBA students.

From academic responsibilities to getting involved in extracurriculars, the newest Colts could always use a little guidance as they immerse themselves in Academy life.

Enter one of CBA’s most recent initiatives: the Big Brother Program.

Each of the 225 freshmen have been paired with a junior or senior to help with this transition. The upperclassmen reached out initially in September to introduce themselves, making sure their freshmen brothers knew that they were always available to chat.

For freshman Michael Child, the initial message from his big brother, junior Casey Hoffman, could not have come at a better time.

“In September, he concluded his email by asking if I had any questions for him. I am taking AP Biology this year, and at the time, I was very nervous about it,” Child said. “Casey had taken the course as a freshman, so I am extremely grateful that he took the time to provide me with so much useful information about the course.”

Hoffman knew that Child would need a little more guidance when it came to his schedule, as Child was challenging himself with an impressive slate of classes.

“The last thing I wanted was for this [relationship] to turn into a source of stress or as just another task he had to complete,” Hoffman said. “We’ve talked back and forth over email about workload, managing time, and some experiences and tips I had for the biology class. I feel like I am in a pretty good position to help him out by sharing my experiences, as well as pieces of advice I wish I knew.”

A constant line of communication and friendly advice is the main goal of the Big Brother Program. While this school year has been altered by ongoing COVID-19 precautions, the upperclassmen were able to start the year with Zoom sessions that focused on important parts of freshman year. 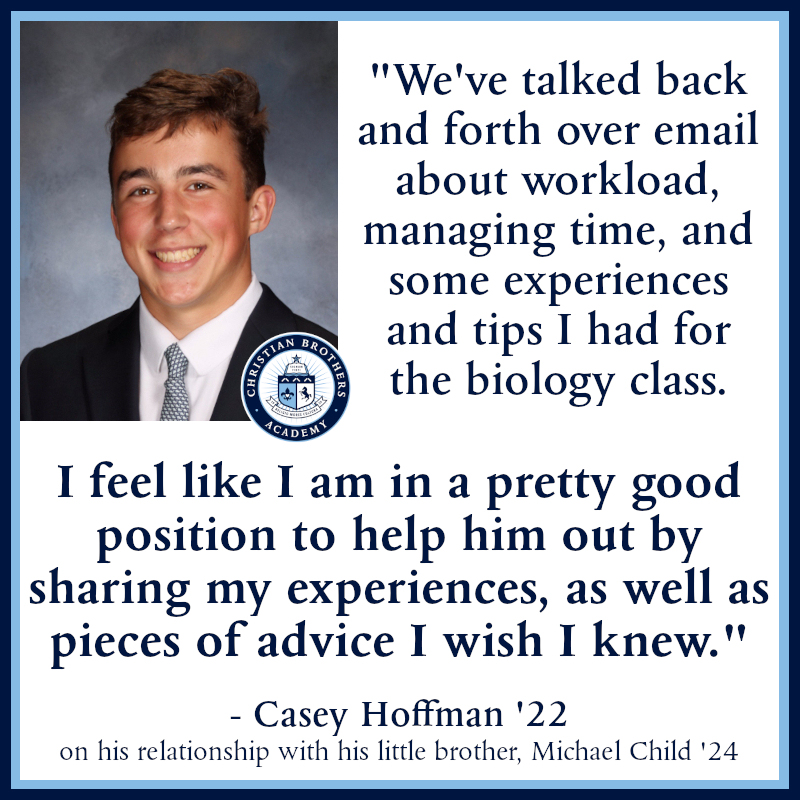 Hoffman and senior Chris Konefal were both able to contribute to these valuable Zoom sessions, which covered topics such as academic challenges, sport tryouts, or some great clubs to join.

“I can remember going to lunch as a freshman and sitting at the big tables in the cafeteria, creating friendships that have lasted me through the years,” Konefal said. “Now with COVID-19, the freshmen have an understandably harder time getting to know their own classmates.”

Konefal was paired with freshman Evan Sorensen and the two quickly struck up a great rapport.

“Evan and I talk almost everyday, whether we are just catching up what we did over the weekend or helping answer some of Evan’s questions regarding clubs or sports,” Konefal said. “We have also discussed the best ways to gain service hours and worthwhile opportunities, such as helping out with the Thanksgiving Food Drive.”

And as a freshman, Sorensen is grateful for the chance to bond with an upperclassmen who once walked in his shoes.

“Chris has made my transition into CBA much smoother than what I imagined,” Sorensen said. “I was stressed about writing papers, but Chris recommended never writing a paper in one night and do little by little each day. He also offered to read over my papers, which has been super helpful.”

The Academy has always put emphasis on the relationship between upperclassmen and freshmen, with no better example than the longstanding GURU program. As part of senior and freshman Theology classes, a senior GURU meets with his assigned group of freshmen to guide the young students through early CBA life, while also touching on how to conduct themselves as Academy men.

The Big Brother Program now adds an additional, valuable connection for both upperclassmen and freshmen. Hoffman came from Spring Lake Heights School, which only sent a handful of students to CBA, so he understands how it can be challenging to find initial footing as a freshman.

“I looked to clubs and programs like GURU to try to become a part of the CBA brotherhood that I heard so much about. I think that having an upperclassman to help introduce me to Academy life in this way would have been a welcome addition to my freshman year,” Hoffman said.

As the school year progresses, it is the hope that the freshmen progressively gain more confidence and independence, while always having their big brother to reach back out to. Both Hoffman and Konefal can already see impressive maturation in their freshmen brothers.

“I have definitely seen Evan grow into a more confident student. It feels great to know I have helped him get more involved at CBA,” Konefal said. “These next four years will be some of the best times of his life and I hope by helping him out a bit this year, he will make the most of his CBA experience.”