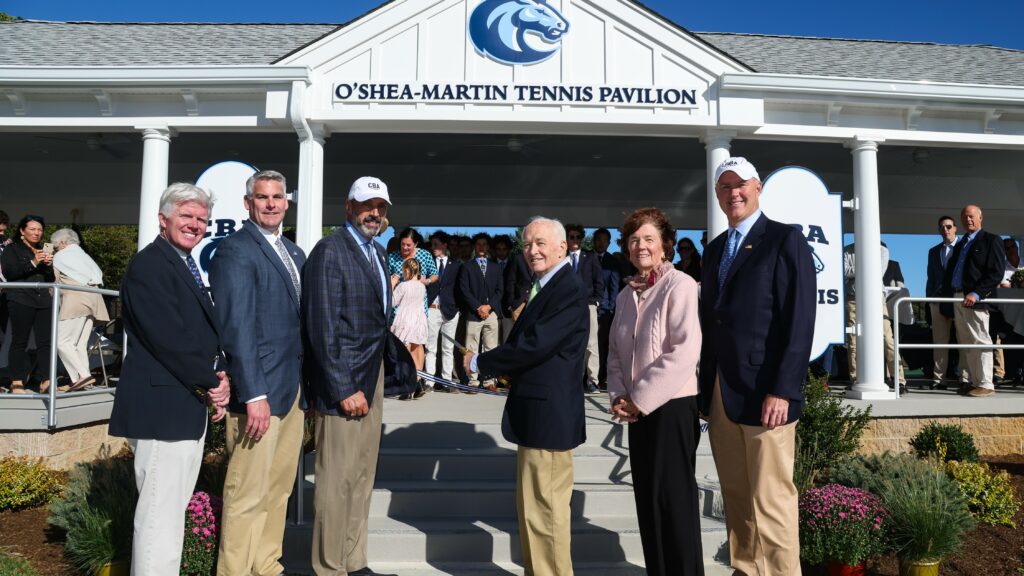 Christian Brothers Academy held a special ceremony on Saturday, September 24 for the official dedication of the brand-new O’Shea-Martin Tennis Pavilion.

The new facility bears the name of renowned CBA tennis head coaches John O’Shea and Brother Patrick Martin, FSC. O’Shea was in attendance for the event and had the honor of cutting the ceremonial ribbon.

The O’Shea-Martin Tennis Pavilion is built at the site of the existing Sullivan Tennis Courts, which were completely redone during the construction process. The six courts now feature the covered pavilion and a mid-court viewing platform. The enhanced spectating and new playing surface make CBA’s tennis courts one of the premier facilities in the state of New Jersey.

CBA Tennis has won 25 state championships in program history, which is the second-most in NJSIAA history. After Martin led the team win its first state championship in 1968, O’Shea served as head coach from 1971 to 1979, winning six straight New Jersey titles during that span.

“It was only fitting to name the new pavilion in honor of Coach John O’Shea and in memory of Brother Patrick Martin,” said tennis alumnus Mark Sullivan ’79, who co-chaired the tennis committee for the facility. “The enormity of their accomplishments is hard to overstate. Aside from the sheer number of team wins and state championships, they also molded their players into Academy Men. Their culture of winning set the expectations for all other CBA sports in the decades that followed.”

O’Shea was joined by decades of CBA alumni, parents, former coaches and friends, along with the current members of the varsity tennis program. In a special moment, Sullivan and current first singles player Jaden Vigneri ’24 played a ceremonial “first serve” to officially open the facility.

“It is exciting that we are able to provide facilities such as this one for our student-athletes,” said CBA President Ross Fales. “Facilities that are commensurate with their efforts and successes, as well as the high standards of CBA, which help accomplish our school’s mission.”

The O’Shea-Martin Tennis Pavilion is the first of five current construction projects to reach completion. Both the Keane Turf Field for soccer and lacrosse and the Sheehan Track & Field are in final construction phases, while the Benilde Hall office building and the Brother Frank Byrne, FSC Dining Hall are taking shape.

“Today, we celebrate the legendary tennis coaches John O’Shea and Brother Patrick Martin and the dedication of this venue marks the start of a series of state-of-the-art facilities at CBA,” said Joseph R. Tort ’76, board chairman and co-chair of the tennis committee. “Just over a year ago, we launched the transformational revitalization of our physical plant, updating our athletic, academic and campus life facilities. The Colt tradition continues at the Academy.”

CBA has also reimagined two of its grass fields into a new varsity rugby pitch, complete with goalposts and field lines. In addition, the Academy is in the early planning stages of the reconstruction of the Round Barn, which will be used for indoor track & field and other athletic programs.

All of these projects are part of the Forever CBA: Securing Our Mission capital campaign that has raised over $17 million to date.