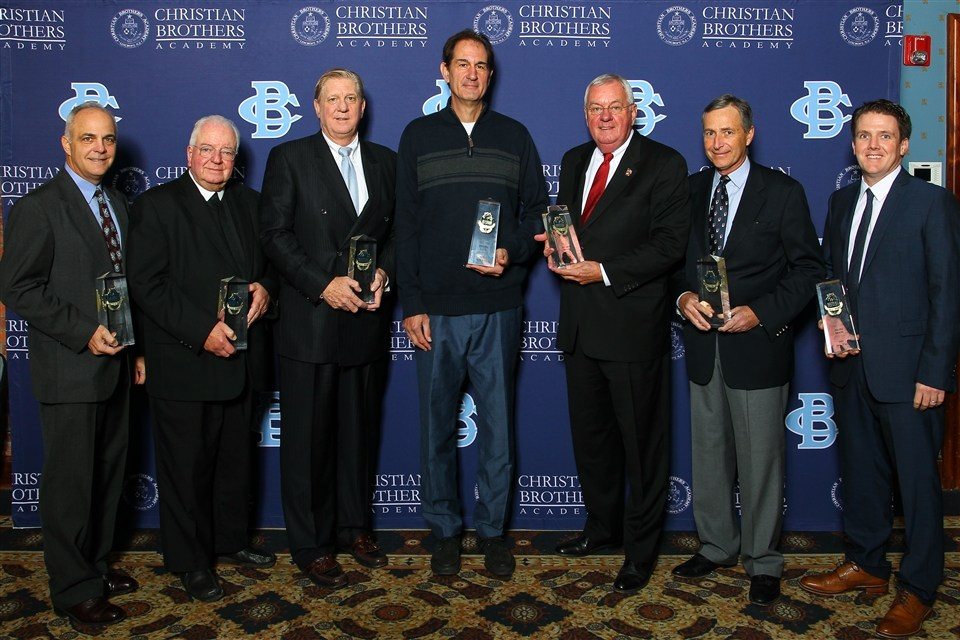 Posted at 18:28h in News by Admin Account
On Friday, November 20, Christian Brothers Academy honored seven outstanding individuals and one state championship team at the third annual Hall of Fame Gala, which was held at Gibbs Hall at Suneagles in Eatontown, N.J.
The Gala recognizes those in the CBA community who best exemplify the school’s ideals and have brought credit and distinction to the Academy. Nearly 300 alumni, family and friends of the Academy attended this year’s event. The night includes cocktails, dinner and an awards presentation, which was emceed by 2014 inductee, Paul Molzon ’72.
The 2015 class featured members who have been stand-outs in academics, medicine, athletics, charity and business. Each individual is given a commemorative award and will be prominently featured on the Hall of Fame display outside Alumni Hall at CBA.
The 2015 inductees included:
Mark Alexander ’76, a Fortune 100 executive, investment firm owner, philanthropist and social advocate.
Paul Caverly ’64, a dedicated community volunteer in the Belmar area, and an integral part of CBA’s Alumni Association. Also a founding member of the Belmar St. Patrick’s Day parade.
John Coyle ’89, quite arguably CBA’s greatest distance runner, state champion and multiple school record-holder. He was also a national champion and All-American captain at Notre Dame University.
Denis Gallagher ’72, is the founder, chairman and CEO of STA, Inc. and has over 39 years of experience in the passenger transportation industry. He is also chairman of Charliewood Pictures LLC (a production and investment company), a board member and principal investor in Novo Media Group (a Los Angeles based film development company), and chairman and principal owner of Front and Center Entertainment.
Christopher Johnson, MD, FACS ’75, is an expert orthopedic surgeon and a pioneer in introducing advanced surgical techniques to this area. As a specialist in sports medicine, he also serves as a team physician at area high schools.
Br. William Martin, FSC., is a former teacher, principal and current director of the Saint LaSalle Auxiliary, headquartered on the Lincroft campus, and serves as co-subdirector of the Brothers’ Community, CBA Lincroft.
Bob Roma ’75, is one of CBA’s most storied basketball players. Roma set individual scoring and rebounding records that remain to this day, and scored over 1,000 points while playing for both the Academy and Princeton University. He was drafted by the Kansas City (now Sacramento) Kings and player professionally overseas.
The 1998 Varsity Swimming Team, the first team in program history to win a state title.
Share
Print page