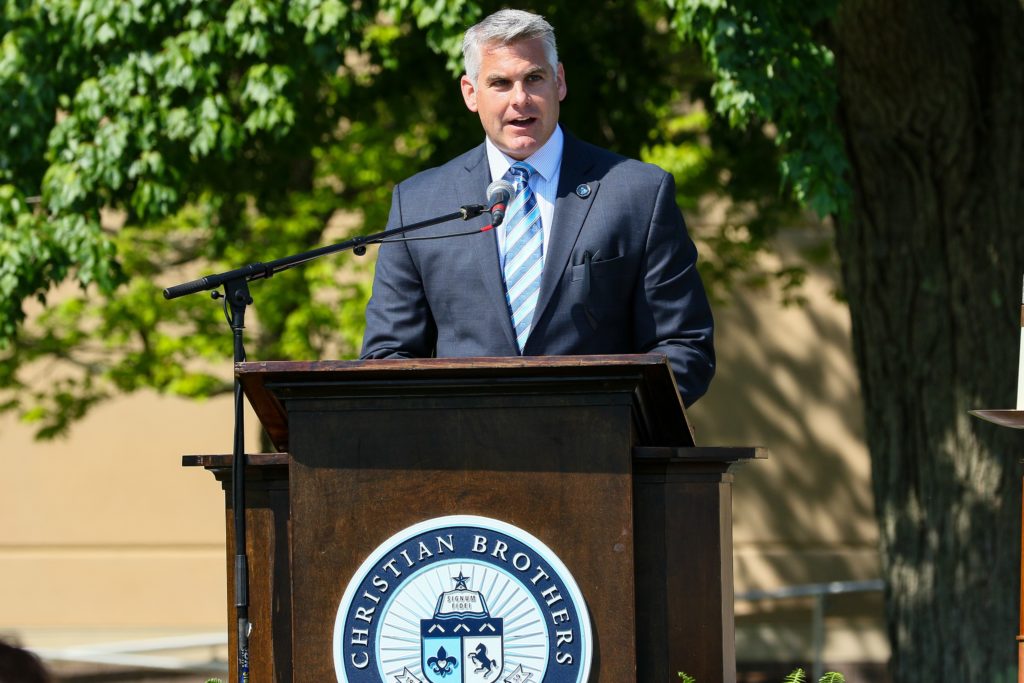 After a comprehensive national search process, Christian Brothers Academy is pleased to announce the appointment of Mr. R. Ross Fales as the fourth president in school history. He will be the first lay president of the Academy when his term officially begins in July 2022.

Fales was selected by the Academy’s Board of Trustees after a four-month, national search process. Assisted by the educational search firm, Carney, Sandoe & Associates, candidates were vetted extensively by a presidential search committee, led by Brother Robert Wickman, FSC, that included several constituent groups, including board members, faculty, alumni, current and past parents, and administrators. Students joined other stakeholders in on site interviews of the finalists. Fales’ selection by the Board has been approved by the Brothers of the Christian Schools.

Brother Robert Shaefer, FSC, Provincial of the Brothers’ District of Eastern North America, shared his excitement for the selection of Fales and his gratitude for those who assisted in the process.

“On behalf of the Christian Brothers, I want to thank the search committee for their work in identifying the best candidate to lead Christian Brothers Academy at this time,” Brother Robert said. “Mr. Ross Fales, a longtime Lasallian educator and leader, understands our charism and tradition to ensure that CBA continues to provide a quality human and Christian education to the young men entrusted to this outstanding school community. This is a challenging time for Catholic secondary education and Ross has the experience and vision to lead CBA into the years ahead, so that it continues to be a vital participant in the mission of the Church in this part of the world.”

Fales has served as the Academy’s principal since 2015, leading the all-boys, college preparatory school’s day-to-day academic operations and essential functions. During his tenure as principal, Fales has guided CBA to several accomplishments, most notably earning the National Blue Ribbon School of Excellence in 2017. It was the second time in school history that CBA earned the award and was one of just 50 high schools nationally to receive the accommodation that year.

“I have had the honor and privilege of working with Ross as our Principal for the past six years and look forward to collaborating with him on taking CBA to the next level during his tenure as President,” said Joseph R. Tort ’76, chairman of the CBA Board of Trustees. “He is a distinguished Lasallian educator and administrator, well-known to our community, who has the vision and passion to build on our 63 years of success.”

Fales’ successful tenure as principal has been marked by multiple enhancements to the student offerings, including additional Advanced Placement classes, dual enrollment courses with Manhattan College, the COLT Plus learning differences program, multiple varsity sports, and new music, theater, media, and robotics electives. In each graduating class under Fales’ guidance, over 95 percent of students have attended U.S. News and World Report ranked colleges and universities.

Fales’ leadership was vital through the pandemic as he adapted school instruction for the online environment, assured safe return to campus, maintained continuous communication with the CBA community, and strived to keep students in the classroom as much as possible.

“I am both honored and humbled to accept the position of President of Christian Brothers Academy,” Fales said. “I would like to thank the Board of Trustees and the Brothers of the Christian Schools for giving me the opportunity to lead this institution that I love and that has become my home over the last 20 years.”

In his new role as president, Fales will become the Academy’s “institution builder,” serving as the chief administrator during an important time in the school’s history. The 157-acre campus is undergoing an exciting transformation, with multiple new facilities being constructed and additional projects scheduled to be completed in the coming years. Fales has a deep understanding of the importance of fundraising, enrollment management, and strategic growth for private, Catholic schools.

Fales has long been a champion of educating the “whole person,” something that has been a hallmark of the Brothers since the order’s founding by St. John Baptist De La Salle over 300 years ago. He served as a member of the Brothers’ District Mission Executive Council, working with the Brothers to support the Lasallian educational initiatives. Fales has directed CBA’s curriculum which puts emphasis on strong academics, supplemented by impactful experiences in faith, service, extracurricular activities, and athletics.

“I truly view my work at CBA as a vocation much more than just employment,” Fales continued. “A notable quote amongst Christian Brothers schools is that Lasallian education ‘seeks realistic ways of touching hearts and teaching minds of students.’ I am honored to have the opportunity to lead the CBA community in doing just that.”

Fales has 16 years of experience in school administration, earning his first role at CBA as Dean of Students in 2006. He was quickly elevated to Associate Principal for Student Affairs in 2007, where he oversaw discipline, student life, service programs, and athletics. As Associate Principal, he was responsible for the addition of multiple sports and clubs, an expanding music program, and more student-driven activities.

After graduating Rutgers University with a bachelor’s degree in Biological Sciences, Fales’ career in education began as a science teacher and swimming coach at several New Jersey high schools, before joining the CBA faculty in 2002 in those same positions. He earned his master’s degree in Educational Leadership, Management and Policy from Seton Hall University shortly after joining the staff at the Academy.

Fales will be succeeding Brother Thomas Gerrow, FSC, who has served CBA as interim president. Brother Andrew O’Gara, FSC and Brother Frank Byrne, FSC guided the Academy as the first and second presidents.

“This Academy was built on the shoulders of three incredible previous presidents, all of them Christian Brothers, and each contributing to the success and advancement of CBA, making it the outstanding institution it is today,” Fales said. “I will strive to uphold this great legacy, while also helping CBA progress in continuing to deliver an excellent, holistic and Christian education in the 21st century.”

A New Jersey native, Fales lives in Avon-by-the-Sea with his wife, Megan, and their three children.