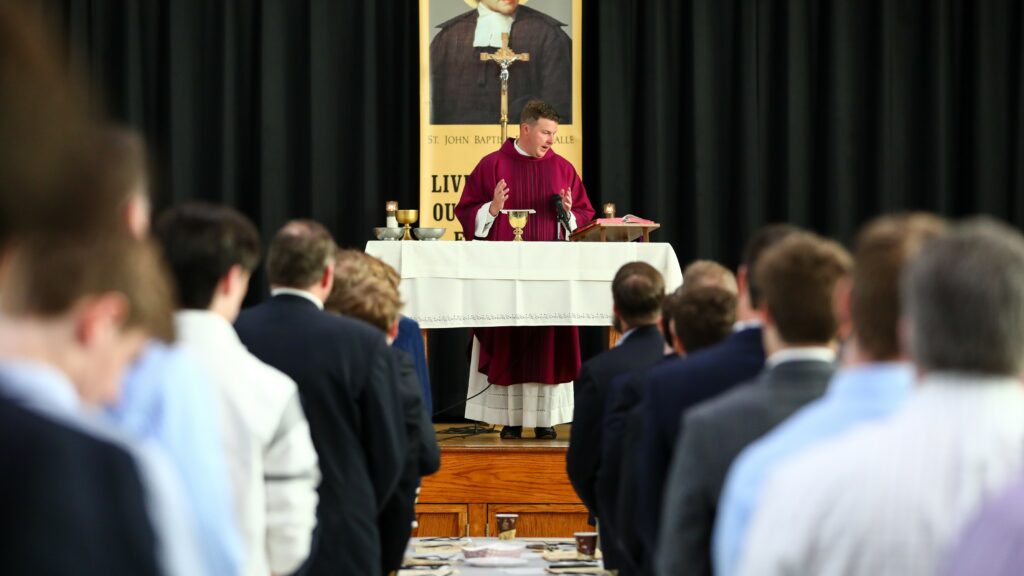 After a two-year hiatus, the 63rd annual Father-Son Communion Breakfast returned to the Varsity Gym on March 20.

It was a welcome sight to see over 450 sons, dads, and grandfathers gather in the breakfast’s typical home, after it was canceled in 2020 and moved outside and modified in 2021.

The event is a staple tradition that dates back to the opening school year of Christian Brothers Academy. The first edition was celebrated on April 10, 1960, when 142 fathers and sons joined together at St. Mary’s Church in New Monmouth. The first class of students and parents chose the Communion Breakfast as one of the first community events, which signifies its continued importance to the mission and tradition of CBA.

Sponsored by the CBA Fathers’ Club, the morning began with Mass, which was celebrated by alumnus Father Chris Dayton ’06 of St. Rose Parish in Belmar.

Mass was followed by the traditional buffet-style breakfast and the socialization between father and son pairings at the long tables that filled the gym.

Each breakfast features a special guest speaker, with Basil Iwyank ’88 taking the honor of addressing the crowd this year. Iwyank is the founder of Thunder Road Pictures, which has produced movies such as the John Wick series, We Are Marshall, and A Star is Born, among many others.

Iwyank reminisced on his days at the Academy, a school which he was pushed to attend by his own father.

“The boundless options he aspired for me were in my mind, my imagination, and my goals,” Iwyank told the audience. “He wanted me to be in an environment that would inspire that journey, so that’s why he sent me to CBA.”

Sixty-three years after the Academy’s first Communion Breakfast, and 35 years after Iwyank arrived on campus as a freshman, fathers continue to send their sons to CBA so that they may develop into the best version of themselves.