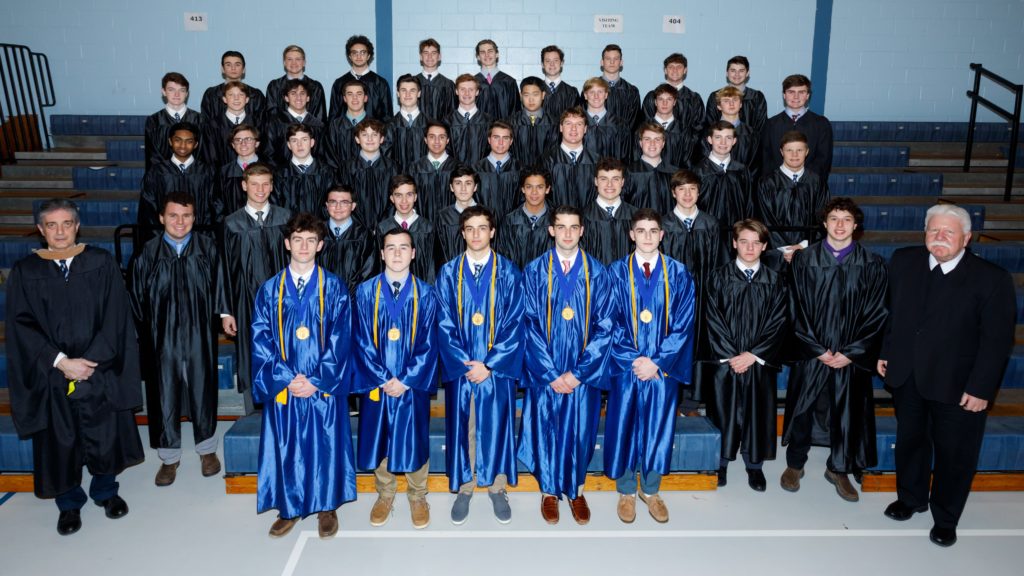 Joining the 23 CBA seniors who were inducted previously, the 46 new members were accepted into this prestigious society, which is based on the pillars of Scholarship, Service, Character and Leadership. As is the tradition, Principal Ross Fales conferred the ceremonial golden tassels to each new inductee as a display of achievement.

To be accepted into the NHS at CBA, students must have a minimum grade point average (GPA) of 91.5, obtained a minimum of 115 service hours, and achieved 10 school activities points, which includes involvement in CBA athletics, clubs & groups, and performing arts. Students are required to have multiple reviews and recommendations from CBA faculty and outside sources.

The newest class of inductees blew those marks far out of the water. The 46 Academy men averaged a GPA of 96, worked 144 hours of service, and gained 17 activities points. Many of the new members hold valuable leadership positions as athletic team captains, executives in clubs, camp counselors, CCD teachers and Special Olympics leads.

“We honor these young men who have not only excelled academically, but distinguished themselves by contributing to the Academy in terms of leadership, service and extracurricular activities,” Fales said to the audience in Henderson Theater. “They are truly well-rounded scholars. We celebrate them and their accomplishments tonight. It is my honor as principal to be the first to congratulate you.”

Chartered at the Academy in 1965, the Saint de La Salle Chapter of the National Honor Society exists to promote scholarship, service, leadership and character among high school students. Membership is open to students who have completed at least five semesters at CBA and who exhibit the qualities of the four pillars to an exceptional degree.

Matthew Thorn FROM THE CLASS OF 2023