Class of 2026 Commits to the Academy Oath 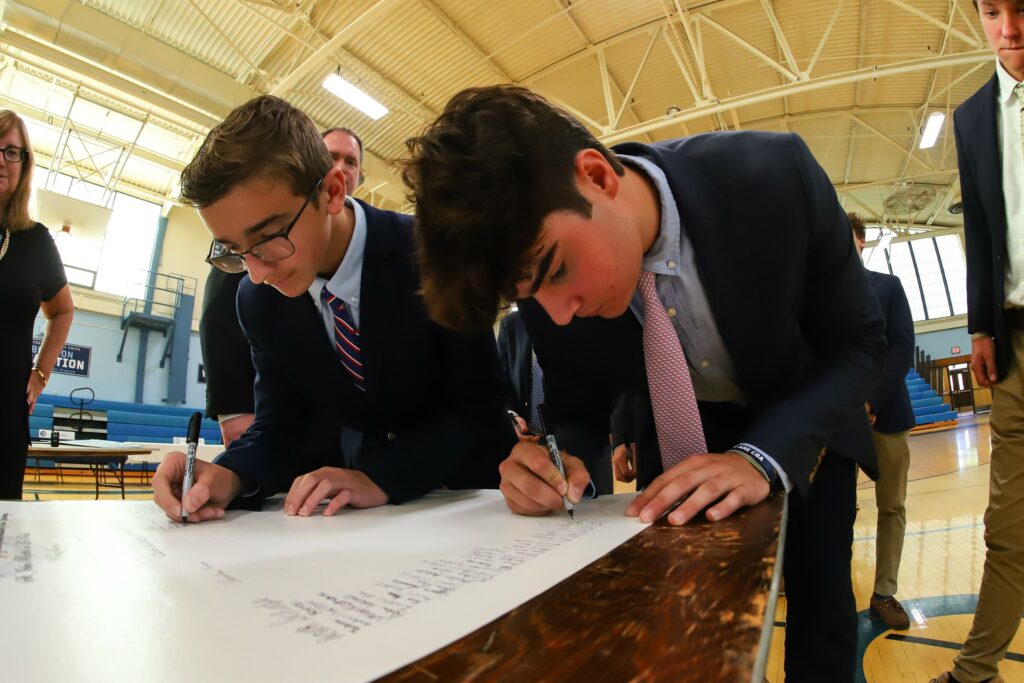 The pillars of the Academy Oath are an expression of the Lasallian values that students learn and strive to live out at Christian Brothers Academy. It represents the school’s pride in its tradition and commitment to its principles. Each year, the student body reaffirms their commitment to being a student at the Academy by pledging to the Academy Oath.

The Class of 2026 was able to learn about the Oath and what it stands for during the annual Oath Day on October 12. The youngest Colts heard from multiple speakers and participated in breakout sessions with senior leaders throughout the day.

Major Matthew Zilinski ’02 served as the keynote speaker to kick off the morning for the freshmen. Zilinski has served in the U.S. Army National Guard for over 15 years, while also working as a police officer in Howell Township.

“It’s belonging to something bigger than yourself, something that calls everyone to state the same verbiage, but have the same moral compass, the same mindset, and the same devotion,” Zilinski explained to the freshmen, comparing his oaths as a national guardsman and police officer to the Academy Oath.

After breakout sessions that dove into the pillars of the Oath, four seniors spoke to the class about the true meaning of the Academy Oath.

“By keeping these words of the Academy Oath, you are making this school a better place,” Jack Butler ’23 explained.

The freshmen class was broken up into smaller groups to officially sign the Academy Oath. Once signed, the Oath is framed and hung in the school lobby for the duration of the Class of 2026’s time at CBA.

The seniors led breakout sessions throughout the day. The topics of discussion included Lasallian virtues, progressing through four years at the Academy, and encouraging them to get involved in anything and everything as the years go on.

“There are going to be times where we all stumble. There will be obstacles and there will be challenges, but the real question is what do you do during those times, how do you grow,” Principal Neil Begley said.

Before the morning’s end, the Class of 2026 recited the Oath as a group for the first time. Check out the video below to see that special moment.

We the men of Christian Brothers Academy,

Do solemnly promise before God,

To live always with honor and integrity,

To serve and stand for those in need,

To strive for wisdom in the pursuit of knowledge,

To uphold the legacy and proud tradition of our Academy.

Live Jesus in our hearts, forever!