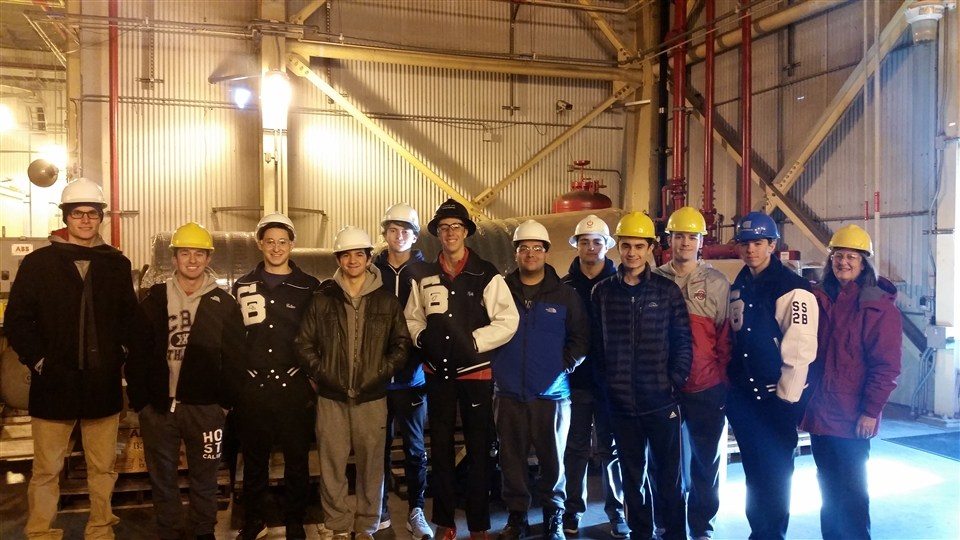 Earlier this month, Environmental Science students in Mrs. Bednarz’s class took a tour of the cogeneration electrical generating station in Lakewood, NJ. The station, a 246-megawatt facility, uses natural gas and ultra-low sulfur diesel to create electricity that is in turn sold to Jersey Central Power & Light Co. (JCP&L) The students were able to get an inside look into the frontlines of the energy industry and one of 33 power plants owned by an international energy corporation.

(At right: Academy men standing in front of a new turbine that will eventually be installed into the Lakewood-based system.)

Students taking Environmental Science have gone on two separate field trips thus far, with a third is slated for April 2017.

The first trip was a hike through Tillman’s Ravine in Stokes State Forest, in which the students collected population data at the nearby cemetery. They also spoke about the history of the Tock’s River dam while sitting in the now abandoned historic town of Walpack. They also visited Buttermilk Falls while on the trip.

About the Tocks River Dam controversy (via Wikipedia.org):
A 1950s proposal to construct a dam near Tocks Island across the Delaware River was met with considerable controversy and protest. Tocks Island is located in the Delaware River a short distance north from the Delaware Water Gap. In order to control damaging flooding and provide clean water to supply New York City and Philadelphia, the U.S. Army Corps of Engineers proposed building a dam. When completed, the Tocks Island Dam would have created a 37-mile (60-km) long lake between Pennsylvania and New Jersey, with depths of up to 140 feet. This lake and the land surrounding were to be organized as the Tocks Island National Recreation Area. Although the dam was never built, 72,000 acres (291 km²) of land were acquired by condemnation and eminent domain. This incited environmental protesters and embittered local residents displaced by the project’s preparations when their property was condemned. After the Tocks Island Dam project was withdrawn, the lands acquired were transferred to the oversight of the National Park Service which reorganized them to establish the Delaware Water Gap National Recreation Area.

About Christian Brothers Academy:
Christian Brothers Academy (CBA) is a private, Catholic, academic preparatory school for boys located in Lincroft, New Jersey. Founded in 1959 and taught in the Lasallian tradition, CBA is dedicated to helping students become intellectually mature and morally responsible leaders for society. Through the combined efforts of the Office of Advancement and friends of the Academy, CBA awards over $1.3 million in scholarships and financial aid to current students. Experience the Academy at www.CBALincroftNJ.org.
Share
Print page