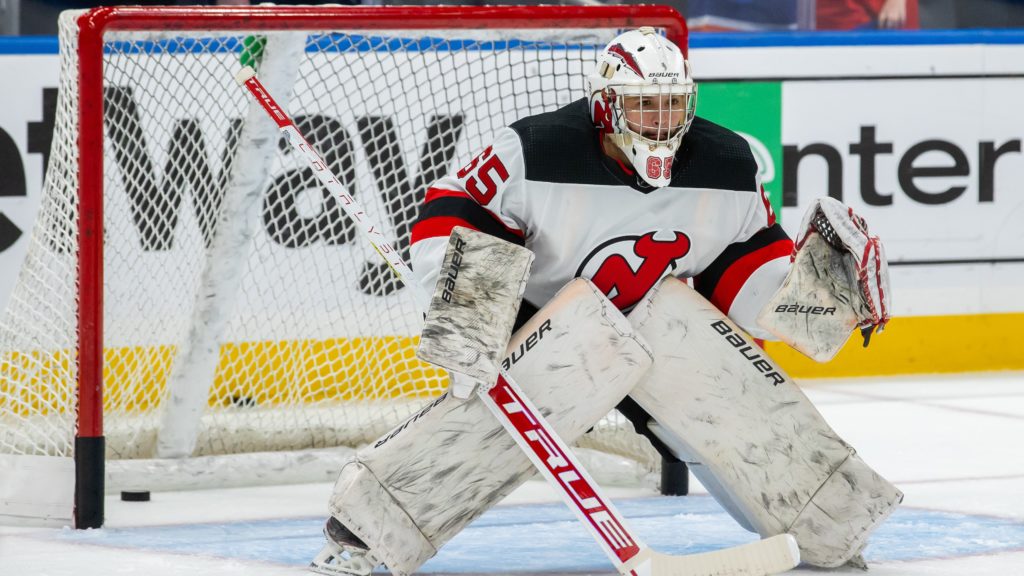 Kyle Shapiro ’11 knew this particular phone call was a possibility.

The CBA alumnus had been signed up to be the Prudential Center’s emergency goalie since October, so he could be called by any NHL team looking for a goalie while playing at the home of the New Jersey Devils.

It just so happens that the first call came from the Devils.

With goalies Mackenzie Blackwood and Akira Schmid both entering the NHL’s Covid-19 protocol on January 12, New Jersey needed added depth at the position, prompting the call to Shapiro.

“They’ve always asked if I was available when they needed an extra goalie for practice, and I have always said yes,” Shapiro said. “My contact at the Devils had sent me a text that they may need someone for practice, and I went and had some fun at practice. Afterwards, I was in the locker room and they came to me and said that they actually needed me to backup in goal the next night.”

The situation took on a life of its own soon after that, with Shapiro texting with friends and family about the whirlwind 24 hours he was about to have. The Devils were playing the New York Islanders at UBS Arena on Long Island on January 13, so he got on the team bus and headed to Nassau County. He was able to stay with the team at the hotel near the arena and went through the team’s itinerary on the morning of the Islanders game.

“I woke up, had breakfast, took my Covid test, and then the team had optional morning skate at the arena, which I went to.”

After lunch and a pregame nap, Shapiro headed back to the arena, where he was able to have quick press session with the media.

“Once I got to the arena, I tried to act like it was a normal game day, but dealing with the media was a ton of fun and I just tried to enjoy it as much as I could.”

As the puck drop approached, the Devils made the night even more special for their newest goalie, letting Shapiro lead the team onto the ice and allowing him to skate a lap by himself.

“It was a first class move by the Devils that they did that for me. It is my first – and probably only – time on NHL game ice, so it was really cool they were willing to do that. The only thing going through my head was don’t fall and if I shoot a puck make sure it goes on net. It was a really cool 30 seconds, noticing my parents and friends in the crowd as well.”

As expected, Shapiro did not see any time in the game, but it was a worthwhile experience nonetheless. As an assistant coach for the NAHL’s New Jersey Titans, he used his time around the Devils to certainly pick up things he can bring back to his highly-competitive junior hockey team.

“That was one of the things I was most excited about, being a coach myself and everything. I was excited to see how the coaching staff did things, because they are all there as some of the top minds in all of hockey. Another cool thing was how much player coaching goes on between teammates, watching these players coach themselves was something I thought was really interesting to see and listen to.”

While his short time with the Devils will be a lifelong memory, Shapiro says he still has to thank CBA and the hockey program for laying a foundation for him. He was a four-year member of the Colts while at the Academy, ironically playing the 2009 state championship game on the Prudential Center ice.

“There is something special about CBA. Just being there, you know it is the brotherhood of it all. Playing hockey at CBA was one of the greatest experiences of my life. I can’t thank the people at CBA enough for what they did for me both on and off the ice. It was an incredible four years.”

The Ocean, NJ native signed an ATO, and here’s the story of his 72 hours as a New Jersey Devil.#NJDevils | @RWJBarnabas pic.twitter.com/TOiOqK44w8