Posted at 07:26h in Campus Ministry, News by Jason Lutz 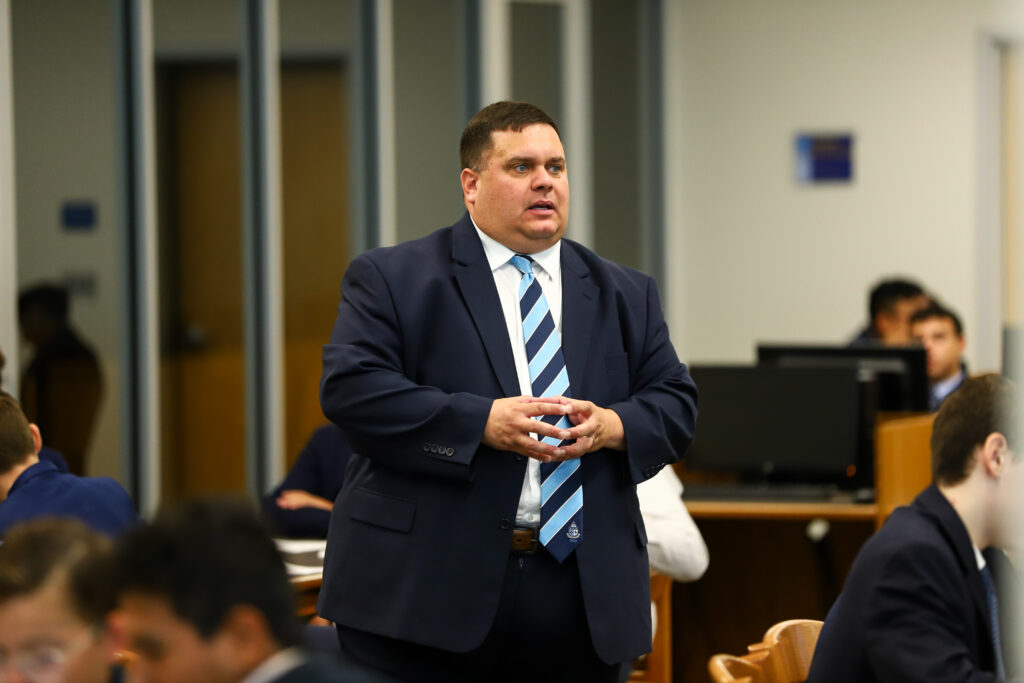 When taking a walk around Christian Brothers Academy’s campus, one realizes quickly that mission and heritage are two important characteristics in the school’s 63-year history.

For decades, the Academy was staffed by the Brothers of the Christian Schools, who taught classes, served as coaches, and led the administration. The Brothers were joined by dedicated lay faculty, who shared a collective vision for the education of the “whole person.”

CBA’s administrative leadership looks different this fall, but a pinpoint dedication to the school’s mission remains.

In tandem with a new administration, CBA now has an Office of Mission Integration, led by longtime Lasallian educator Mr. Matthew Meehan.

“Considering we now have both a lay president and a lay principal for the first time in CBA’s history, we wanted to be demonstrative with regard to the Lasallian mission at CBA,” said CBA President Ross Fales about this new office. “This initiative will drive both continuity of understanding and offer practical platforms for learning the Lasallian mission.”

Meehan is certainly no stranger to the Academy, having served as Dean of Students for the past five years. In that role, Meehan was charged with helping young men develop responsibility, maturity, and a good conscience as they worked through their high school years. While he was ready for a change, he learned so much about CBA and the young men entrusted to the school’s care.

“It is an emotionally draining job, but in getting to know the students as I did, I was reminded of just how much they are navigating, their pressures, obstacles, desires to make proud their families,” Meehan said. “I learned how resilient our boys are, and how respectful and kind they are. I also learned how much they need us – as faculty – to be big brothers and sisters to them as La Salle calls us to be.”

With La Salle’s call in mind, Meehan will now be guiding the entire CBA community in better understanding Lasallian history, pedagogy, and spirituality.

“In simple terms, the Office of Mission Integration seeks to promote a practical understanding of what is meant by ‘Lasallian’,” Meehan said.

Over 300 Years of History

St. John Baptist de La Salle founded the Brothers of the Christian Schools in the late 17th century. In the over 300 years since his death in 1719, Lasallian schools have been founded in 80 countries around the world and presently educate over one million students.

Together with teachers in Reims, France, La Salle founded a lay community which took the name “Brothers of the Christian Schools” in 1680. Today, there are over 3,000 Brothers worldwide, who partner with nearly 90,000 lay educators, like the dedicated men and women of CBA’s faculty.

In the Rule of the Brothers of the Christian Schools, the Institute states its ultimate mission is “to give a human and Christian education to the young, especially the poor, according to the ministry which the Church has entrusted to it.”

In the last 300 years, the Brothers have opened schools in a variety of different socioeconomic settings, but the goal has remained the same.

“The Lasallian mission seeks to not only educate the mind, but also for the educator to get to know and develop the whole person,” Meehan said. “It demands that we get to know him as a whole person, and in doing so, his heart is touched and he has seen the presence of God at work in his life.”

“We are founding this office on La Salle’s call to touch the hearts of our students, en route to helping them to identify the God-given gifts and talents they possess,” Meehan said. “La Salle saw faith development as central to Catholic education. He also saw it necessary for the students to maximize their intellectual abilities so as to be able to contribute to society and its betterment as an example of the lived faith.”

Statistically, CBA students have excelled in living out their faith through tangible actions. In each of the last five years, graduating students have averaged more than 100 hours of service, which is more than double the 50-hour requirement.

Of course, the community involvement and outreach of Academy men is much more than a number. Students consistently are lending a helping hand at food banks and kitchens, mentoring underprivileged youth, and donating their time to non-profit foundations.

These young men are also traveling outside of the local Jersey Shore area to make an impact. CBA regularly runs service immersion trips to locations that need the most assistance, such as the De La Salle Blackfeet School in Montana, the Appalachia Service Project in Virginia, the La Salle Educational Center in Miami and more.

Meehan’s office will be overseeing all of these service initiatives, as well as the Campus Ministry aspect of CBA. He has a group of dedicated faculty members, such as Lasallian Youth Coordinator Mr. Ciro Saverino and Service Immersion Coordinator Mr. Matt Butler, to assist him in these important parts of the CBA experience.

Integrating Our Mission Throughout Our Community

Something Meehan is most excited about when starting this new role is his ability to work with every part of the CBA community.

He got to work right away this summer, working with Fales and the alumni office on new initiatives. In addition, he presented to the CBA Board of Trustees on the nature and needs of Lasallian educators at their summer retreat.

The Office of Mission Integration will also be running a series of formation seminars, which began in August with CBA’s new faculty members. First and second year staff members are required to ongoing Lasallian formation seminars throughout this school year, helping them better understand the Lasallian way.

“Our parents so often say that they wish they knew more about La Salle or that they wish they went to a school like CBA,” Meehan said. “The parent seminar series will enable me to truly educate our parents in Lasallian history, pedagogy and spirituality. They will have a similar opportunity as their sons to have their hearts touched and minds inspired.”

During his time in D.C., Meehan earned his Master’s of Theological Studies at Washington Theological Union. He also completed the intensive, three-summer Buttimer Institute of Lasallian Studies at St. Mary’s College, Moraga in Northern California.

“Mr. Meehan’s vocation is clearly to inspire understanding of and give practical tools for the lived experience of authentic Lasallian education,” Fales said. “He has already had a profound impact on many students here at CBA and will continue to do so, while also being able to touch CBA’s many other constituencies.”