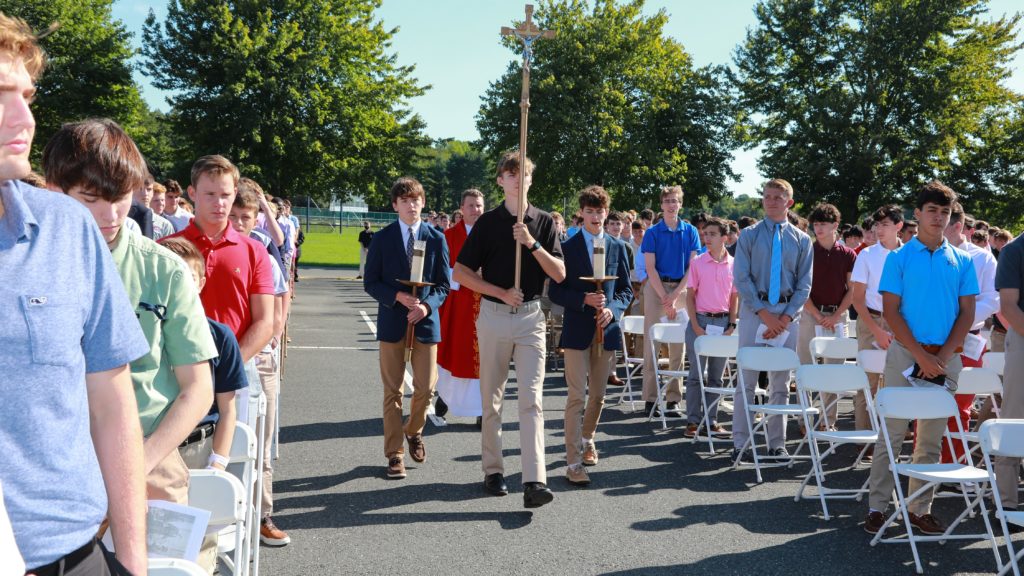 As the Academy works towards a more normal schedule in 2021-2022, the school year got underway with traditional CBA experiences in class orientations and the first Friday school-wide Mass.

After four days of “Tips for Success” seminars at the end of August, the freshmen in the Class of 2025 were welcomed for their orientation day on Tuesday, September 7. It was a morning of important CBA firsts: first class assembly, first homeroom meeting, first yearbook photo, first time meeting fellow brothers. They were joined by the sophomore class, who participated in similar activities throughout the half day.

The upperclassmen – the juniors and seniors – came to campus on Wednesday, September 8 for their orientation. With the college search and selection process on the top of their minds, the upperclassmen listened to important notes about navigating this important, but exciting decision.

All 880 young men descended onto the CBA campus on Thursday for the first full day of classes. It was a day filled with meeting teachers, finding classrooms, and listening to what is expected in each course.

To wrap up a short week, the Mass of the Holy Spirit was celebrated on Friday, September 10, which has been the tradition at the Academy for many years. There may not be a better way to prepare for a new school campaign than to gather as a school community and pray for a successful, positive year. CBA was lucky to be joined by Father Chris Dayton ’06 of St. Rose in Belmar, who celebrated the Mass and blessed the new student liturgical ministers. Once Father Dayton blessed them, Principal Ross Fales presented each minister with his medal.

While the first few days are in the books, September at the Academy is packed with exciting activities, including the traditional Freshman Run & Welcome Day on September 17 and the Junior Tie Ceremony on September 24.