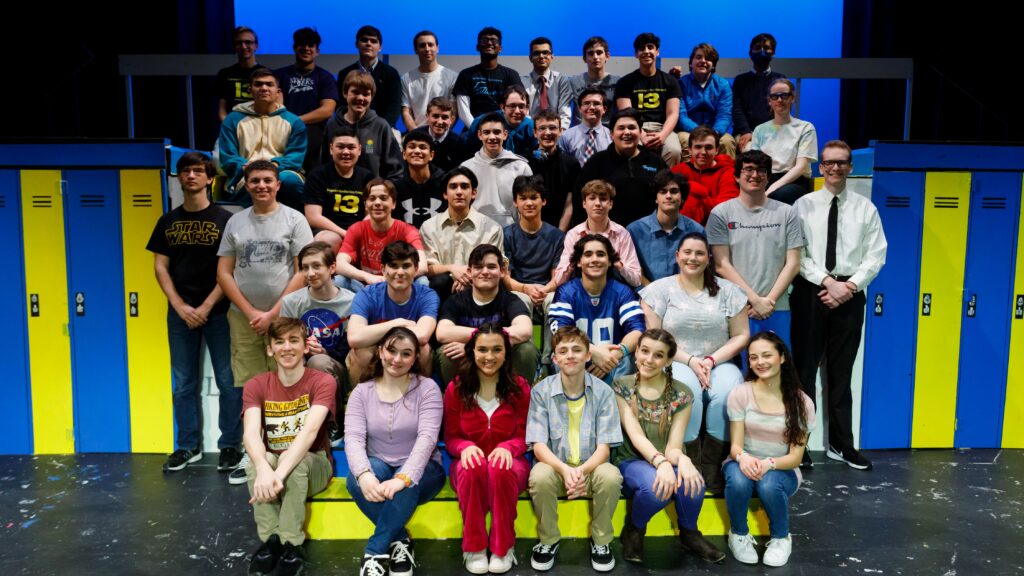 There are two lines in the official synopsis of Pegasus Production Company’s spring musical, 13, that jump out to the reader.

“Surrounded by an array of simpleminded middle school students, he needs to establish his place in the popularity pecking order. Can he situate himself on the comfortable link of the food chain, or will he dangle at the end with the outcasts?!”

The “he” in the synopsis is 13-year-old Evan Goldman, who was played by freshman Nicholas Buchanan. Evan is moved from New York City to a small town in Indiana, where he is greeted with trials and tribulations of a teenager in a new school.

The plot of 13 has young Evan facing issues that many teenagers – including Academy men – experience in today’s age. After reading the script, company director Mr. Marcos Orozco ’01 and his fellow faculty supervisors saw an opportunity to have discussions with the Pegasus’ cast and crew on these issues.

“We created a number of prompts and follow-up questions based on what we felt was important to the students,” Orozco said. “We then worked with the students and they added in their own insight and asked us to expand on certain topics.”

Using the Stage as a Classroom

Soon enough, the company was meeting once-a-week in small groups to expand upon the chosen topics, which included respect for other cultures, self-esteem, treating others with disabilities, bullying, unintentional discrimination, and life transitions.

The discussions were well received by the cast and crew, and students felt comfortable enough to open up about personal experiences.

“It was a very safe and welcoming environment. Often, we ended rehearsal and some students stayed and continued to discuss the topics,” Orozco said.

The newfound educational component of 13 was a fitting bookend to a school year that saw Pegasus connecting the classroom to the stage in the fall with The Great Gatsby. The company was able to work with the English department to have sophomores learn more about the content of the book and stage drama.

However, there was not a class in the schedule that could tackle all of 13‘s topics, so the faculty of Pegasus needed to create their own.

“We, as the adults, had to take a step back and say this is a show that has themes, humor, and situations that CBA students are likely to encounter in their day-to-day,” said Ms. Gina Morrello, who serves as choreographer. “Having the space to open up about their shared experiences really helped the students feel more connected. I get the sense it normalized a lot of their concerns that they have about being a teenager and all of the change that comes with that.”

Throughout the nearly four-month process of putting together the spring musical, the growth of the cast and crew was obvious. The discussions became deeper, experiences were shared more wholeheartedly, and of course, the creativeness of the product on the stage took off.

From the acting under the lights to the beyond-the-scenes happenings, students poured their hearts into making this production as authentic as possible.

“As the Art Director, our production of 13 offered me a great opportunity to portray these characters in ways that made our audience think about their own biases towards different ‘types’ of people,” Andrew Giordano ’22 said.

Giordano referenced the female lead Patrice, who was played by Howell junior Kylie Mulvihill, and how she was meant to be viewed as the outcast. Instead of designing her costume as strikingly different than the norm, it was a subtle touch that Giordano’s costume team went with.

“She looked very put together, but wore a different color to give her individuality,” he said. “As I spoke to our audience members, they noticed this creative choice and actually realized their own preconceived notions of what an outcast is.”

The spotlight for most of the show is on Buchanan, who quickly went from Pegasus rookie to seasoned veteran. His character Evan narrates these difficult issues throughout the show and navigates the different stigmas and cliques among teens.

“Our directors were amazing in managing all of the different parts, and helping us put on a show that we were all really proud of,” Buchanan said. “I’m so proud of how much we all learned, improved, and grew up during this experience.”

While Buchanan is just starting his career in Pegasus, senior Chris Fittipaldi has been involved eight productions as a member of the tech crew. As tech director, Fittipaldi has a good perspective of the company and the overall development of the cast and crew.

“Our production of 13 was hands-down one of the greatest learning experiences I have ever had the pleasure of being a part of,” he said. “Having a weekly discussion with my peers to discuss the myriad of different themes found in the show was truly refreshing. I am immeasurably grateful for the faculty that facilitated this comfortable, and unique environment.”

With the lead character being a 13-year-old, there was an obvious connection to the freshman class at CBA. While they might be just a tad older than Evan, the issues and struggles remain the same for 14 and 15-year-old students.

That led to the freshman class gaining a private showing of the musical during school one day. But, it was not simply “see it and move on.”

“We felt that if the theater students were feeling this, certainly other students were as well,” Orozco said. “Immediately we thought that we should bring it to the school at-large. Using the established relationships that the GURUs had with their freshmen, it seemed like an obvious choice as it would allow the students to open up and share in a setting they already felt comfortable in.”

Following the show, the freshmen gathered in their small GURU groups to discuss the same topics that the company had been talking through during rehearsals. Led by the senior GURU, they had valuable conversations about things that are directly affecting them.

“Reflecting on the underlying themes of the show, the freshmen and I were able to develop a deeper understanding of how we interact in our daily lives and how important it is to think a little more before acting,” said Chris Ern ’22, one of the senior GURUs. “Being the ‘bigger’ person and taking notice of the differences in the world around us is an important lesson for myself as a GURU and for the freshmen in their first year at the Academy.”

The best part about the run of 13?

The positive discussions did not stop at the Henderson Theater doors.

“Parents were provided an outline of the topics that would be discussed, so we were able to continue these conversations with our son at home,” said Mrs. Lauren Buchanan. “All of this resulted in Nick not only growing as a performer, but also as a young man. This format provided the students a unique opportunity to learn and grow.”

While the topics were geared towards teenagers, it became obvious that both teachers and parents valued the chance to have these conversations as well.

“The discussions that were facilitated with Aidan and his peers were more powerful than anything we as parents could do on our own at home,” said Mrs. Dina Zagel, whose freshman son Aidan played the character Eddie. “It was clear that the students were unified and had a sense of openness as it showed up in the their harmonious performances.”

Many of these students, specifically freshmen, were having these important discussions before they are confronted with the often uncomfortable situations.

“Often, we find ourselves talking to students about issues such as bullying, self-deprecation, and discrimination post-incident or encounter, but this was not the case for this production,” said Mr. Christian Lopez, who serves as musical director. “With this show, we were able to have open conversations that weren’t just responses to something that happened.”

Pegasus ultimately had seven showings of 13, six regularly scheduled and one special performance for the freshmen class. At each show, the audience read through Orozco’s “Letter from the Director” which spelled out much of the learning process that occurred over the past four months.

He drew up excitement for what the crowd was about to see on stage, but also included a noteworthy line about the production.

“What you didn’t get to see was the connections that a group of teens made over the past four months as they shared their own struggles from middle school and high school. It was a much different and much needed production experience.”

Approximately 50 students participated in the production of 13, whether it was on stage, in the tech or stage crew, or as business managers or costumers.

With inclusively the main message of the musical, it sure felt like more than 50 high schoolers. It felt like a community of young men and women that are ready to make a positive impact on society.

“We have learned and grown so much as a company because of the approach we took to this show, in learning about how we view others, and just as importantly, how we view ourselves,” Giordano said.