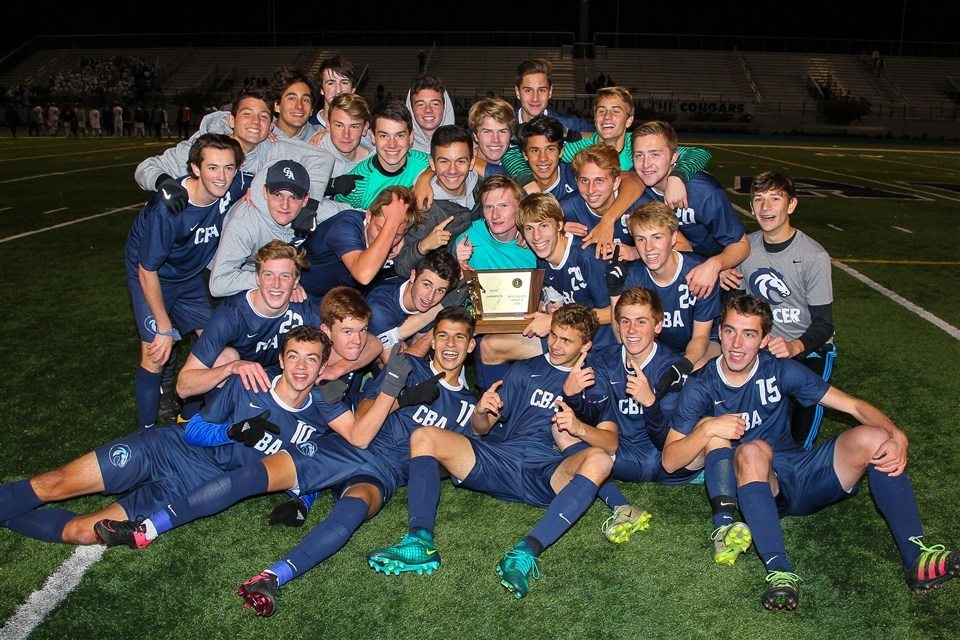 One year ago, the narrative was a bit different.

Christian Brothers Academy Cross Country and Soccer were both in the 2015 Non-Public A State Championships on the same weekend, and lost. To make the losses sting a bit more, both programs’ head coaches were heading into deserving retirements at the end of the season, marking the final time they’d have a chance at the titles.

Fast forward to 2016, the new story is special.
In their first seasons at the helm of programs with great expectations, Coach Sean McCafferty (XC) and Coach Tom Mulligan (Soccer) captured their first state championships as head coaches at CBA. The cross country team topped Saturday’s championship by beating second place Don Bosco Prep, while the soccer team won a 1-0 thriller against Seton Hall Prep on Sunday night.
But they will be the first to tell you: it’s about the team, specifically the upperclassmen, who used last year’s losses to fuel victories in 2016.
“Last year’s disappointment in the final was this year’s motivation to get back to the non-public state championship and bring the title back to Lincroft,” Mulligan said. “We never lost sight of our goal. Every non-conference game [Don Bosco, DeMatha (Md), Chaminade(NY)] and the Shore Conference Tournament was a preparation for the state championship game. The seniors stayed focused the entire season.”
The 13 soccer seniors will graduate with five total championships: the 2015 & 2016 Shore Conference Championships, the 2015 & 2016 South Jersey Sectional titles, and finally, the 2016 Non-Public A State Championship. The lone goal on Sunday night was a senior-to-senior connection, as Matt Thorsheim found the net off an assist from Matt Mawson in the 73rd minute.
“This senior class is a special group of young men,” Mulligan said. “They did everything that was ever asked of them and accepted every challenge with enthusiasm. They are soccer players that truly enjoy practices as much as the games. I enjoyed every minute I was able to share with them this season. From the summer league, to our Christian Service, and obviously all the championships they earned, they always supported each other.”
On the cross country side of things, the Colts narrowly missed winning the 2015 state championship to Don Bosco, and they were not going to let a chance for redemption slip away.
“The boys on the team have improved a lot in the recent two months,” McCafferty said. “Last week at the NJCTC Championships, our second seven handled Don Bosco’s third guy. If we did our jobs, we [knew] we would win with a good margin. Over the past two weeks, we talked about the race often, but losing never crossed their minds. I think the Colts Neck dual meet [win] kept the state meet loss under wraps.”
The cross country seniors, who still have the Meet of Champions and then the Nike Northeast Regional on the schedule, have won their share of titles as well, including multiple Shore Conference Championships and last year’s Meet of Champions. Senior Geno Anzalone led the way for CBA on Saturday, finishing fourth overall and the Colts’ number one.
“The seniors on our team are so important,” McCafferty commented. “In December 2015, when Mr. Heath stepped down from coaching, I knew the seniors were [going to be] key. They have brought this team together and given us heart. Our team thrives on their day-to-day effort.”
Sunday night’s soccer victory was the first state title since 2011 for the Colts, and marked the sixth time in program history that CBA has been crowned state champions (1992, 1998, 2000, 2002, 2011). Those all came under longtime head coach Dan Keane, so for Mulligan Sunday night was his first shot at the biggest title.
“After coaching high school sports for 29 years at the sub-varsity level, it was extra special to inherit such a talented group of soccer players and help them achieve their goals,” Mulligan said. “I am grateful to the administration of CBA for giving me the opportunity to lead the soccer program into the future. I look forward to continuing some new traditions like the Keane Cup Alumni Game and Team Christian Service, but most of all, I enjoy coaching the CBA players”
For McCafferty, who won state championships as Holmdel High School’s coach, it was also his first opportunity to etch his name into the CBA lore, following up four decades of winning by Coach Tom Heath. CBA had won 26 Non-Public A State Championships under Heath’s leadership, so the Colts’ number 27 was special for McCafferty, but he refuses to close the book on the season before some major races.
“My hardest and most important weeks of coaching are ahead of me,” McCafferty said, referring to the upcoming Meet of Champions and Nike Northeast Regional. “I am just thankful to have such an amazing groups of kids and an awesome coaching staff. The journey has been fun- so far- but we have a few miles to go before we sleep.”
CBA Cross Country will run in the All-Groups Meet of Champions on Saturday, November 19th, followed by the Nike Northeast Regional on November 26th, with a chance to qualify for the Nike National Championship on the line.
If this past weekend was any indication, the new eras of CBA cross country and soccer are poised for decades of success.
For more on CBA Athletics:
Visit LetsGoColts.com, the Academy’s one-of-a-kind athletics site, and follow @CBAColts on Twitter and Instagram for exclusive Colts content.
Share
Print page