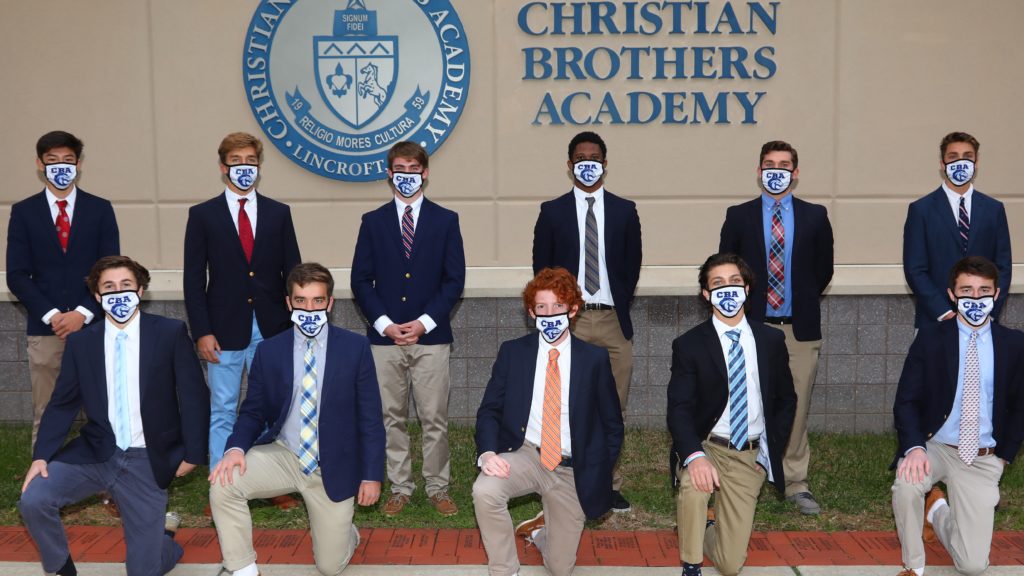 Thirteen Christian Brothers Academy student-athletes celebrated their commitments to Division I universities across the country on December 1.

The following CBA seniors committed during the early signing period:

“On behalf of the entire CBA community, I would like to congratulate our student-athletes and their families on this momentous occasion,” said Director of Athletics Michael Mazzaccaro. “Through their dedication to excellence, both in their sport and in the classroom, these young men represent the core mission of CBA Athletics. In a year unlike any other, they have upheld the traditions of CBA and cemented their legacy as standout members of our community.”

This group of 13 student-athletes have been standouts and key contributors over the past few seasons of CBA Athletics.

The five rowers were integral in the crew team’s best finish in program history at the 2019 Head of the Charles Regatta, which is the premier scholastic regatta in Boston each year. Christian Brothers finished sixth out of a field of 85 boats in the Men’s Youth Four division.

While they unfortunately missed their 2020 season, the four Colts lacrosse athletes were contributors to the 2019 season that advanced to the Shore Conference Championship. D’Andrea was the starting goalie as a sophomore, saving 73 shots against 39 goals allowed. Martin scored an impressive 41 goals as a sophomore.

Longo and Sieg were starters on this fall’s soccer team that finished undefeated and won the sectional tournament. Longo was a main cog in CBA’s defense that only allowed four goals all season, while Sieg was a midfielder who notched five goals and four assists.

Santos was a leader on both the 2019 and 2020 cross country teams. He finished sixth overall to help CBA win the 2019 Non-Public A state championship, as well as taking second overall when the Colts won the 2020 Non-Public sectional championship.

Miksic is a javelin thrower and pole vaulter on the CBA track & field team. He finished third in the pole vault when the Colts won the 2020 Non-Public A indoor track & field state championship last winter.

SOUNDBITES FROM THE STUDENT-ATHLETES

“My four years at CBA have taught me how to deal with adversity in my life. My good times have helped me build relationships with different types of people and my bad times have taught me to get up when I have been knocked down. CBA Lacrosse has taught me what it is like to have a group of brothers, using our own talents to work toward victory.” – Noah D’Andrea, Georgetown University Lacrosse

“CBA went over the top in helping me prepare for the next step in my academic and athletic career. My teachers, classmates, teammates and coaches have always set the highest standard. The competitive nature combined with a unique sense of camaraderie gave me an opportunity like no other.” – Jack Paterno, University of Pennsylvania Crew

“I think the most important lesson I’ve learned as a member of the cross country and track teams is the value of hard work and discipline. Our coaches continuously forced us to challenge ourselves physically and mentally, and I’ve come to appreciate how this transfers into success.” – Ben Santos, Bucknell University Cross Country

“CBA has always challenged me to take the next step and to never settle for anything less than you are capable of. We live in a competitive environment and CBA always pushed me to be the best whether in the classroom or in the boat. I always strive to be better because of what CBA has instilled in me throughout my four years.” – Connor Prior, Brown University Crew

“I am prepared to take this next step in my academic and athletic career because of the experiences that I have learned from during my time at the Academy. Academically, I learned as an underclassmen the importance of time management as a student-athlete. To be able to focus on lacrosse during the season, I had to prioritize my work in the classroom.” – Aidan Quinn, Marist College Lacrosse