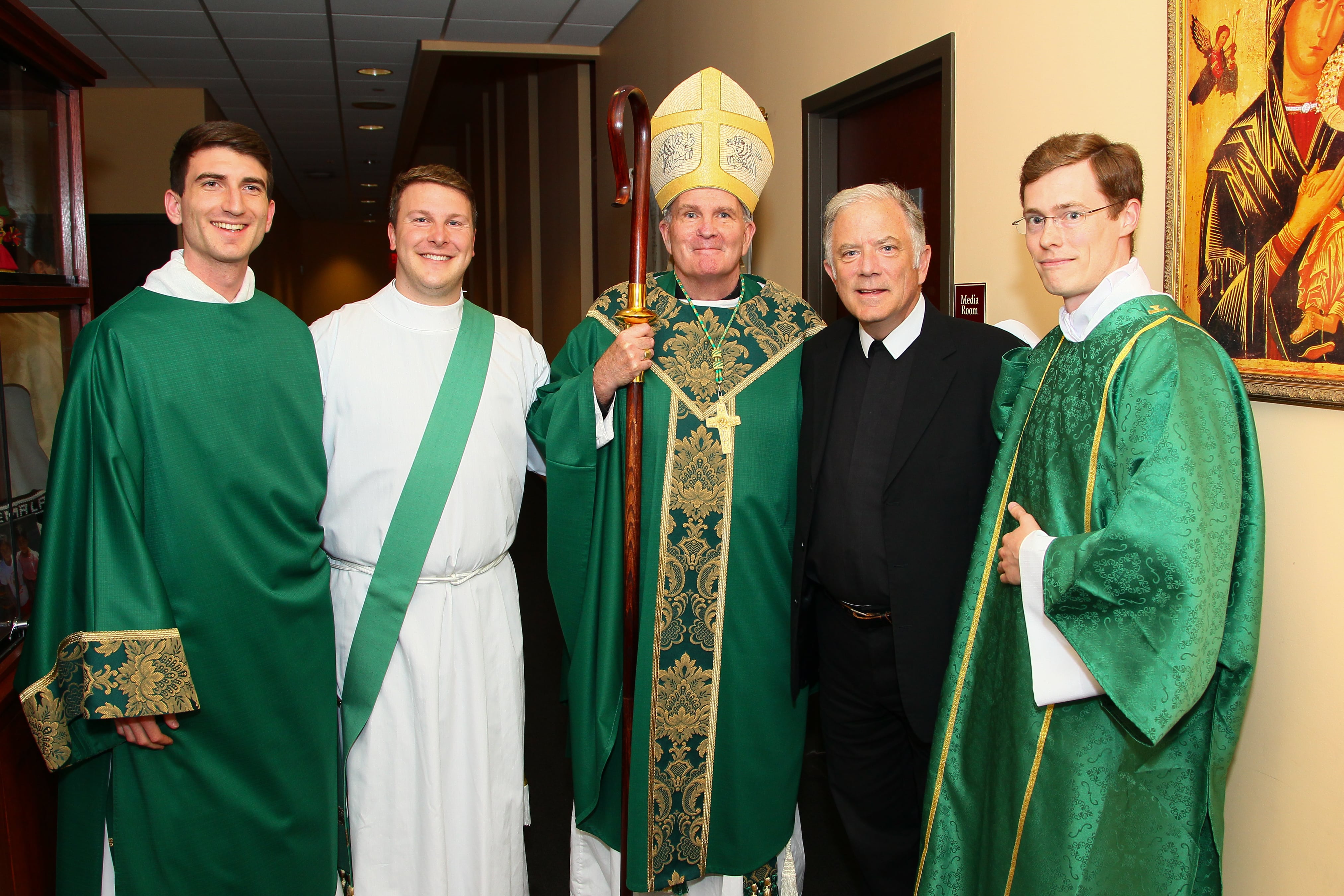 Three Christian Brothers Academy alumni will be living out the school motto of “religio, mores, cultura” as Roman Catholic priests in the Diocese of Trenton.

With Most Reverend Bishop David M. O’Connell presiding, Christopher Dayton, Michael DeSaye and Nicholas Dolan were ordained on Saturday, June 2nd at St. Mary of the Assumption Cathedral in Trenton.

For the first time in more than a decade, the men who were ordained in the Class of 2018 all grew up within the schools and parishes of the Diocese of Trenton.

“Congratulations to Fr. Nicholas, Fr. Christopher and Fr. Michael on their ordination to the Priesthood,” said CBA President Brother Frank Byrne. “The entire community of Christian Brothers Academy is proud of you. May God bless you as you begin your ministries.”

Here are each of their official biographies from the Diocese of Trenton:

Deacon Christopher Dayton, 30, was born in Long Branch, the eldest of eight children of Chip and Melissa Dayton. The family belongs to St. Catharine-St. Margaret Parish, Spring Lake.  He is a 2006 graduate of Christian Brothers Academy, and a 2010 graduate of Christendom College, Fort Royal, VA, where he received degrees in political science and economics. He prepared for the priesthood in St. Mary Seminary and University, Baltimore, graduating May 17 with bachelor of sacred theology and master of divinity degrees.  His first priestly assignment will be in St. Rose Parish, Belmar, where he will as parochial vicar.

Deacon Michael G. DeSaye, 34, was born in Newton, the eldest of four children of Gregory and Deborah DeSaye. His home parish is St. Benedict in Holmdel. He is a 1997 graduate of Holy Family School, Lakewood; a 2001 graduate of Christian Brothers Academy and a 2005 graduate of Ithaca College, where he earned a bachelor’s degree in music and piano. Recognizing a desire to serve the Church, Deacon DeSaye first entered St. Mary Abbey, Morristown, later becoming a seminarian for the Diocese of Trenton. He holds a pre-theology certificate from Theological College (connected with The Catholic University of America in Washington) a master of divinity degree from Mount St. Mary Seminary, Emmitsburg, Md.  He will serve as parochial vicar in St. Joan of Arc Parish, Marlton.

Rev. Brother Nicholas Dolan, 25, was born in Brick, one of four sons of Robert and Maria Dolan. He attended Allenwood Elementary School, Allenwood; New School of Monmouth County, Holmdel; Wall Intermediate School, Wall Township, and Christian Brothers Academy. Rev. Brother Dolan went on to attend Franciscan University of Steubenville, Ohio, where he earned a bachelor of arts degree in philosophy in 2014. His preparation for the priesthood included spending a year in St. Mary Seminary and University, Baltimore, from 2014 to 2015, and Mount St. Mary University and Seminary, Emmitsburg, Md., recently earning a master of divinity degree. Rev. Brother Dolan is part of the Oratory of St. Philip Neri (located in his home parish of St. Anthony of Padua, Red Bank) a religious group of priests and brothers who live, pray and serve together. Brother Nick will remain in the Oratory, and will serve his first priestly assignment as parochial vicar in St. Anthony Parish.