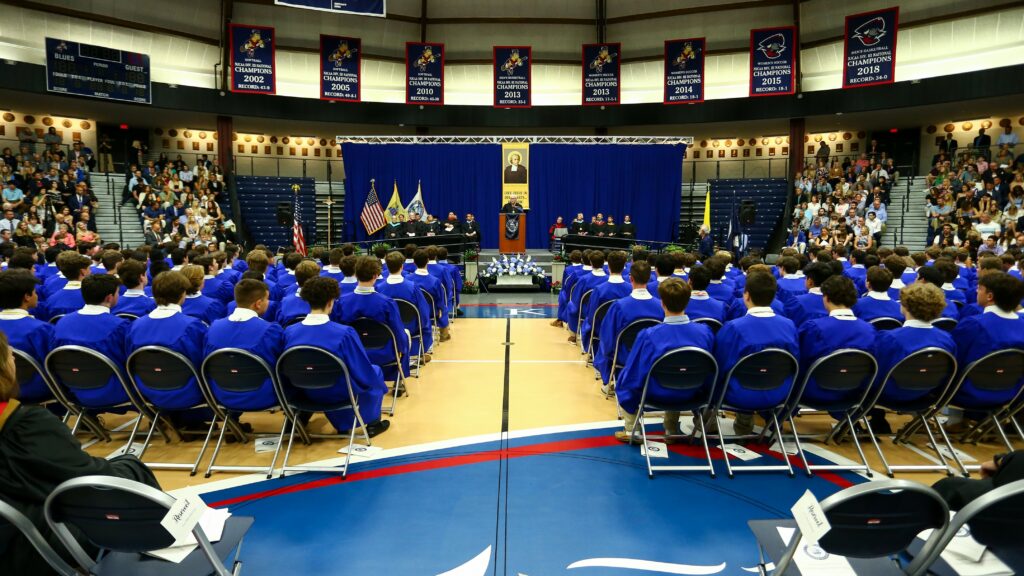 The 60th graduating class of Christian Brothers Academy is certainly a special group of young men.

The members of the Class of 2022 are commended for their outstanding academic, athletic, service, and extracurricular achievements throughout their time at CBA. Most importantly, these graduates have learned how to be determined, confident, and strong individuals, weathering three years of pandemic-related changes to their school life.

“You will likely always remember the bonds that you have built within the community of Christian Brothers Academy,” said Principal Ross Fales to open the 2022 Commencement Ceremony. “Remember, once a man of the Academy, always a man of the Academy. It has been a privilege to be your principal over the last four years and watch you grow into the young men that stand before me tonight.”

The 217 Academy graduates gathered for the 60th commencement exercises on Friday, May 20 at Brookdale’s Collins Arena, receiving the CBA diploma that they have been working towards over the past four years.

“You truly are brothers for life to one another,” said President Brother Tom Gerrow in his congratulations. “Christian Brothers Academy truly embodies the character of the Lasallian spirit. As a class and as individuals, you should feel proud of your accomplishments and rejoice in your successes.”

The 217 graduates received over $25.471 million in merit-based scholarships to colleges and universities across the country.

75 seniors graduated with distinction (seven-semester GPA of 91.5 or higher).

The Class completed 21,928 hours of community service, which is an average of 101 hours per student when only 50 hours are required.

51 senior student-athletes were scholar athletes (varsity athletes with seven-semester GPA of 91.5 or higher).

This senior class has been accepted to 212 colleges and universities 35 states, Washington, D.C., Montreal, and Dublin. You can check out what school each graduate is attending here. Many of the graduates reported an impressive array of college scholarships that had been offered to them. Those scholarships are listed in the Commencement program here.

A recording of the 2022 Commencement Ceremony can be found below.