The Great Gatsby Connects the Classroom to the CBA Stage 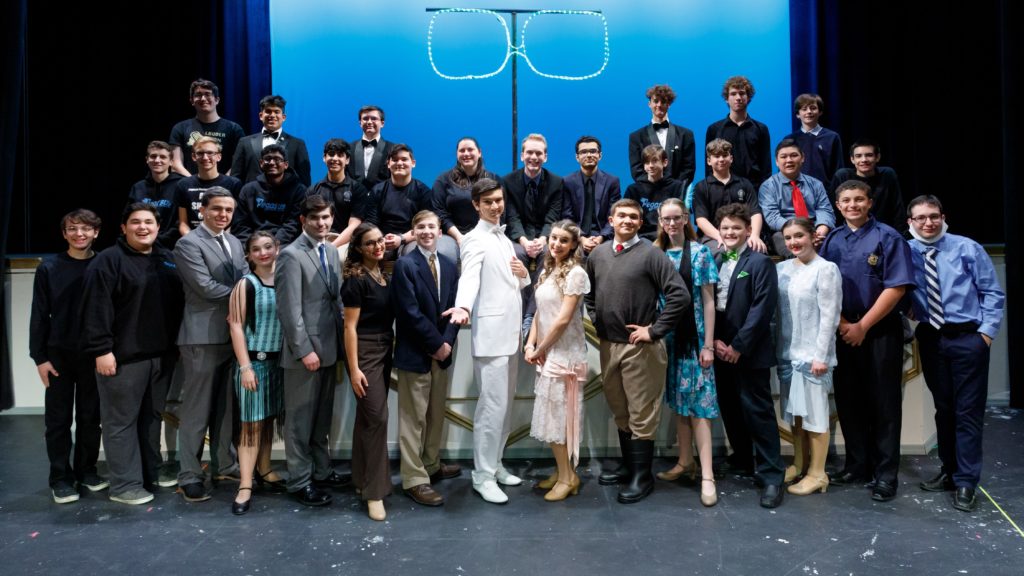 With Broadway’s inspiration still shut down last spring, the Pegasus student leaders made it their mission to have a serious and meaningful production in the fall of 2021. Almost instantaneously, the idea of performing The Great Gatsby rose to the top of their list. In fact, several students noted it was their favorite work in their English classes and many commented how important some of the topics would be to explore.

“When your students start the conversation with the idea that they want to further explore things they’ve learned in class, how can you say no?” said Marcos Orozco ’01, director of Pegasus. “After a year of so many restrictions on performing arts, I just wanted to find a way to give them the things they wanted.”

Fast forward to November 2021, the performances of The Great Gatsby once again showed the greater CBA community that a group of student leaders can create productions that are filled with passion and quality. They produced and performed five shows over two weekends, keeping sold-out audiences on the edge of their seats.

Orozco and the company doubled down on the connection to the classroom as well.

Since the written work is being studied by the sophomore English classes at CBA, the students performed Gatsby for the entire sophomore class in an effort to bring the novel to life. The sophomore-specific performance received high praise from teachers and students alike.

News that Pegasus Production Company was producing a stage adaptation of The Great Gatsby was exciting to the members of the English department, particularly teachers of sophomores.

“I think students learned quite a bit about how both a director and actor need to interpret the play and the source material from which the play was adapted in order to develop a character that is true to the vision of the author but also uniquely their own,” said Megan Belford, English department chair and sophomore teacher. “I hope it inspires them to build confidence in their own interpretations of literature in order to develop a more nuanced interaction as they read and understand the context of the work.”

After seeing the play themselves, sophomores felt they had a deeper understanding of the themes and motivations of various characters. They were also inspired by the dedication of the cast and crew in bringing these characters to life. Following the class performance, sophomores participated in a question and answer session with the cast and crew, gaining insight into the development of the play from idea to performance, while learning about the collaborative nature of the process.

“I found it fun to be able to take what I had read in the book, and what my teachers had said about the characters and their personalities, and integrate the character into my own person,” sophomore James Nardiello said. “I’m proud of the work we did and ecstatic to know that the sophomores were delving into the work we put so much into.”

For the upperclassmen in Pegasus, the connection to the underclassmen through the show’s storyline was important. Junior Ian Hoffman, who is the student management leader for the company, knew that it was a rare opportunity for high school students to serve as teaching assistants of sorts.

“When we picked The Great Gatsby, it was a dream of mine to get to connect with the classic piece of literature that I know and love,” Hoffman said. “Being able to make those connections to the different characters and ideas in the novel brought me close to it and helped to remind me of the value of honoring classic literature. Sharing our production of the show with the sophomore class felt wonderful as I believe that they have created that same connection that I now have.”