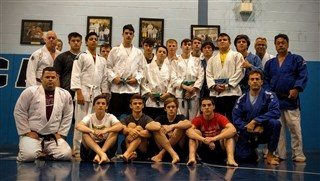 CBA Brazilian Jiu-Jitsu (BJJ) is the only high school BJJ club in the state of New Jersey. The club is dedicated to having fun, promoting health and building confidence all while developing life-saving skills.

Students are trained by faculty coaches Mr. Butler and Mr. Tomaino, both Pan-American NOGI Champions and multiple IBJJF competition gold medalists. The club competes in tournaments around the tri-state area and meets two to three times per week, with more frequent practices during tournament season.

Coaches pick club officers depending on their dedication and rank. Members are required to make one meeting per week to be considered in good standing.

The club competes in the Pan American Games and the New Jersey Brazilian Jiu-Jitsu Championships. Additionally, CBA BJJ conducts women’s self-defense courses during the year and worked with the Red Bank Salvation Army to help teach nearly 30 kids who could not otherwise learn to train in BJJ.